Kiefer Sutherland will surrender to authorities to face a minor assault charge for head-butting a fashion designer at a party, a law enforcement source told the New York Daily News.

Sutherland will be charged with third-degree assault for the attack on designer Jack McCollough, sources said. 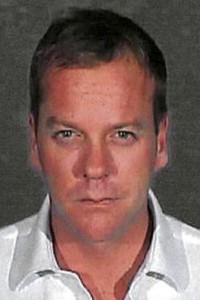 will be issued a desk appearance ticket for the misdemeanor – meaning he won’t be jailed and will be free to travel before he’s arraigned.

Sutherland slammed his head into McCollough’s at a SoHo nightspot – felt bad about the bizarre display according to a friend.

Still, the friend insisted Sutherland lashed out because McCollough, a designer for Proenza Schouler, bumped into actress Brooke Shields and didn’t apologize. “Kiefer was provoked,” the friend said.

Another source at the party meanwhile said Sutherland ”way overreacted” when McCollough bumped into Shields ”clearly by accident” while she was chatting with Sutherland.

A source at the post-gala party who witnessed the altercation claims ”it happened in a flash. Suddenly there was all this yelling and cursing and Jack’s face was all bloody.

”Kiefer really looked like he was in a daze of some kind.”

The designer reportedly was rushed to a New York hospital, suffering from a broken nose. He was released Tuesday after being kept in the hospital overnight for observation.

McCollough’s publicist called Sutherland’s actions a ”vicious, violent, unprovoked assault” on the designer. ”Anyone who knows Jack McCollough knows that he wouldn’t hurt a fly.”

The actor, who co-starred with Shields in the 1996 film ”Freeway,” is currently on probation in Los Angeles on a DUI charge. The L.A. authorities have yet to comment on what, if any, action they will take in light of the Monday night incident.

McCollough’s people are not saying if the designer will be filing a lawsuit against Sutherland.