Imagine John Lennon at 70. Without a doubt he would be creating music and promoting world-peace. Lennon would be writing books and propagating art. He would surely be enjoying his two children as they experience adulthood. He would inspire and motivate us like he always did. Perhaps even working again with his former band-mate, Paul McCartney.

What a story Lennon would have to tell us at 70.

Sadly, John Lennon was taken from 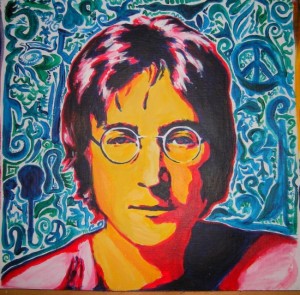 us some thirty years ago by a killer whose motivation is still not fully clear. Though Lennon is gone he is never forgotten. His image is everywhere. There are radio programs devoted to his accomplishments. Films such as the recently released “Nowhere Boy” that attempt to analyze his childhood. His talent and energy continues to resonates.

Those of us who were fans miss him terribly. A brilliant talent taken way too soon. A dreamer silenced for ever.

Perhaps if we tune in to his message his meaningless demise might be easier to accept. He said it 39 years ago;