Joan Rivers has compared Cosco to Nazi Germany, upsetting the chain store as well as the Anti-Defamation League.  The problem started when Cosco refused to carry Rivers’ new book, “I Hate Everything … Starting with Me,” because the back 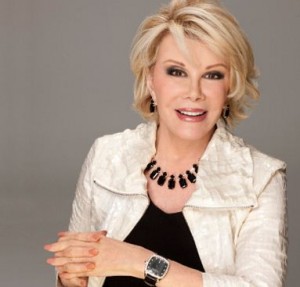 On Thursday, Rivers upped the ante.  In an interview, she told KTLA that “People should have the right to have the literature they want. This is the beginning of Nazi Germany.”

Annoyed by the comment, ADL National Director Abraham H. Foxman, himself a survivor of the Holocaust, charged that the comedian is being insensitive to the victims of the Nazi regime.

“While Joan Rivers may be right in criticizing Costco’s decision, there is simply no comparison between a private company’s choice not to sell a book and the policies of the Nazi regime that engaged in the systematic persecution and slaughter of millions of Jews and others during the Holocaust,” Foxman said in a statement on Thursday.

“Such comparisons only serve to trivialize the Holocaust and are deeply offensive to Jews and other survivors, as well as those Americans who fought valiantly against the Nazis in World War II.”

In a letter to Rivers, the ADL called on the comedian to retract her remarks and refrain from using Holocaust imagery in the future.

Rivers created a scene at a Costco in Burbank on Thursday after she chained herself to a shopping cart and used a bullhorn to protest the retailer’s ban. She agreed to leave when police arrived.

Joan Rivers hit back at the Anti-Defamation League Friday, after the group criticized her for comparing Costco’s decision not to sell her new book to the Nazis.

“My husband lost most of his family in Auschwitz, so don’t talk to me about the holocaust,” Rivers said in a statement to TheWrap.

The ADL slammed the comedian saying that her remarks were insensitive to the victims of the Holocaust and called on her to retract her comments.

In her statement, Rivers said the group was wasting its energy.

“The ADL should worry more about the world’s attitude toward Israel than waste their time and energy on me because I’m not going to stop saying what I think,” she said.