Jonathan Lipnicki, the cute kid from Cameron Crowe’s 90s classic film, “Jerry Maguire” has been granted a temporary restraining order against a woman he once dated. 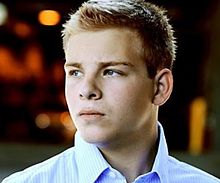 by Access Hollywood, Lipnicki, now 20, claims that his ex, Amber Watson, 20, entered the bedroom of his L.A. home May 14 and went after him while he was laying in bed.

“When I tried to get up, she tried to pin me to my bed,” he states. “I had to move her off me physically and get out of dodge.”

Lipnicki claims Watson “threatened to ‘annihilate me.’ It took twenty minutes and other people to get her out of my apartment.”

Lipnicki did not suffer any injuries during the incident.

Watson, who has been ordered to stay 100 yards away from the former child star, is due in court June 7.