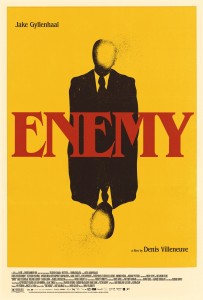 auto-pilot, seemingly lost in a haze of self doubt and apathy.  Bell stays in a dumpy, barely furnished apartment in a seedy party of Toronto and not even his attractive, frisky girlfriend (MELANIE LAURENT) stirs him beyond the occasional and predictable sexual liaison the two of them share.

Watching a movie on the recommendation of a colleague, Adam spots his dobbleganger, a bit player in the film who looks exactly like him.  Compelled to track down the actor, Adam learns that the man’s name is Anthony Clair and the resemblance between them is uncanny in every way, right down to an identical scar on their bodies.

Before long Anthony Clair’s beautiful and pregnant wife, (SARAH GADON) is brought into the mix and the psychodrama begins to take some strange though not totally unexpected turns as it spirals toward it’s violent and stunning conclusion. 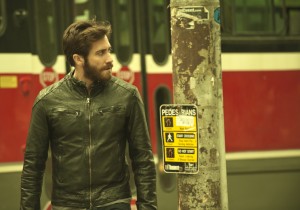 Jose Saramago’s 2004 novel, The Double, the film examines those dark corners of the mind where fear and fantasy reside, where hope is a limited option and psychological survival is something that may come with a price.

All the performances are subtle and exceptional but it is Mr. Gyllenhaal who does the heavy lifting here in the duel roles of Bell and Clair.  He manages to find the nuances of both the characters and in the process creates sympathetic portrayals that keep the suspense slowly bubbling till it come to a full boil.

Director of Photography,  NICOLAS BOLDUC and the film’s director, Villeneuve  turns Toronto into a bleak sea of bland, sterile high rise apartments where people live less than ordinary lives, where secrets abound, waiting to rise to the surface.  With muted tones and great attention to detail the film shows us a world where anyone might be the enemy, or is the enemy living inside us all?

Currently playing on VOD through DirectTV and opening theatrically March 14, 2014, “Enemy” is a film well worth seeing.