The crowds at the AFM appear by all accounts to be thinner than in past years.  Most sellers complain the market is slow.  Only films with star names and a US theatrical release seem to be creating a buzz. 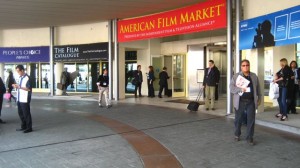 thing missing from the American Film Market is the security guards outside the hotel who last year searched bag, purses and suitcases before allowing people to enter.

Has the AFM lowered it’s terror threat for 2009?  Are we safer this year than last, or is it the bad economy that prevents the AFM from conducting what most feel was an unnecessary search in the first place?

When we asked for a reason we were referred to the AFM Security Office who sent us to AFM Management–who offered no comment.