The punchlines just keep on coming in “The Rainbow Bridge,” the new, Woody Allen-esque comedy currently playing at the Ruskin Group Theatre in Santa Monica.  Clever writing from Ron Nelson, strong acting from a superb cast, and tight, fluid direction by Michael Myers make this a production well worth 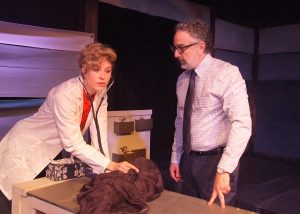 The story deals with a middle-aged defense attorney, Jerry, who visits a veterinarian, Dr. Stein, in order to put his late mother’s ailing dog to sleep. The good doctor, who happens to be not only attractive but also a little bit sex crazed, has had the hots for old Jerry since he first started dropping by.

After the sad procedure is over,  Dr. Stein hands Jerry some text that she keeps on her wall in order to soothe the pain of grieving pet owners. The sappy, heartfelt little poem talks about pets and owners being reunited in the afterlife.

No sooner does Jerry finish uttering the words, his dead mother, Lois, and his dead sister, Amanda, materialize in front of his eyes. No one but Jerry can see them, and he is suddenly dragged back into the family chaos that has surrounded him all 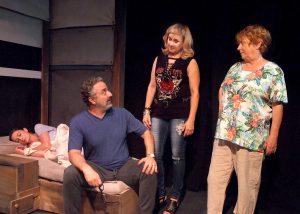 Jerry begs his mom to leave him alone, to let him live his life, and the feisty old broad agrees under one condition. That Jerry kill her nemesis, an elderly lady now suffering with dementia. Jerry says no way but mom and sis keep haunting the poor bastard, making his life miserable, until Jerry reluctantly gives in.

While this seems a far fetched and unexpected compromise from a fine, upstanding criminal attorney, you haven’t met his mother and sister. They are a foul mouthed pair who mock and taunt Jerry, pushing all his buttons because they know exactly where they are. After all, they’re the ones who installed them.

Though “The Rainbow Bridge” has a dark undercurrent, it is the non stop humor that help make that undercurrent, and the suspension of disbelief that much easier to digest.

Ron Nelson puts hillarious dialogue into the mouths of his characters. Lynne Marie Stewart as Lois, and Mary Carrig 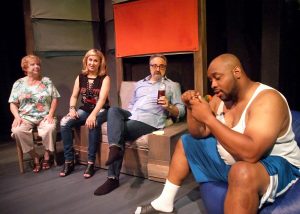 as Jerry’s sister, Amanda, are both rewarded with raunchy one-liners–though Paul Schackman as Jerry easily holds his own in the comedy department. The repartee between the trio delivers most of the laughs.

Emily Jerez is relatable as Jerry’s wife. Jaimi Paige is sexy and seductive as the veterinarian, and L. Emille Thomas is particularly strong as Jerry’s client, Theodore, a gay arsonist who unexpectedly gets dragged into the madness.

Rounding out the cast is Mouchette Van Helsdingen as Harriet, the intended murder victim who manages to get considerable laughs despite barely opening her eyes, and muttering only a few lines of dialogue.

“The Rainbow Bridge” is a fun diversion that will definitely leave you with a smile on your face.