On Thursday, Nov. 3, 2011, Hong Kong Day was celebrated at the American Film Market (AFM). A series of events was put on by the Hong Kong Trade Development Council (HKTDC) to put a spotlight on the benefit of co-productions in Hong Kong.

Day began with a ceremonial ribbon cutting at the entrance of the Loews Hotel, followed by a seminar about co-producing in Hong Kong and the China market, and a cocktail reception for invited guests.

“Given the success of our first Hong Kong Day at AFM last year, we are once again thrilled to highlight the vibrant film industry in Hong Kong and its role as an important route into both the Chinese mainland and Asian markets,” HKTDC Regional Director of Americas, Louis Ho, said. “The influx of American companies at this year’s FILMART, led by the efforts of the Independent Film & Television Alliance, and from first-time 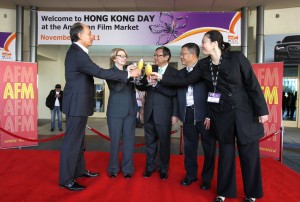 exhibitors representing Cambodia, Iceland, Turkey and the United Arab Emirates, provided a nearly 9% increase in exhibitors. We look forward to expanding our relationships with the global film community even further in the coming year and exploring new co-production opportunities.”