Carol Burnett and the Hollywood High School have a shared history.  And at a glittering event held at the El Capitan Theatre in Hollywood on 10th of January Hollywood High honored its most famous alumni.  “This is my old stomping ground, I lived just around the corner on Selma.”  Carol told the stars of Hollywood and the students of Hollywood High as she received the CAROL BURNETT HONOR OF DISTINCTION AWARD.

Shirley Jones and Marty Ingels, amongst others, took to the stage to share their love of one of Hollywood’s most beloved funny ladies.  And 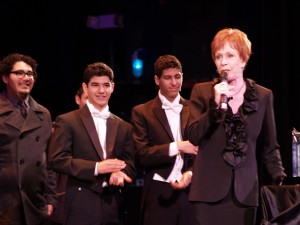 the students of Hollywood High School filled out the show with great music and dance.

Each year The Carol Burnett Honor of Distinction Award will be presented to a accomplished Hollywood High alum.  And forever a corner of Hollywood will bear the name Carol Burnett Square declared Councilman Tom LaBonge of The City of Los Angeles as he skipped on to the stage with the air of a Councilman used to footlights and sparkle.  LaBonge also proclaimed Jan 10th as CAROL BURNETT DAY IN LOS ANGELES. 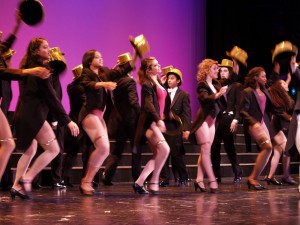