Sorry Guys. Too Late for That.

Since the release of the fifth tape revealing Mel Gibson’s mad rants and threats against his former girlfriend, Oksana Grigorieva, his team have gone into overdrive to 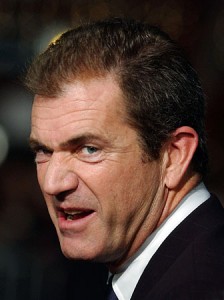 present Mel as an up-standing citizen and fine husband and father to his multitude of kids.

They have found audio experts to state that the tapes have been “tampered” with even after various top experts for the CIA and the FBI have analyzed the tapes and conformed their authenticity.

They have also convinced Mel’s ex wife, Robyn Gibson to write a letter to the court to state that “Mel never engaged in any physical abuse of any kind toward me before, during or after our marriage.” Robyn also claims that there was never any domestic violence perpetrated by Mel against any of their children.

Wonder if the fact that Mrs. Gibson is due to receive upwards of $450 MILLION dollars from her divorce from the insane actor have anything to do with her stepping up to save his reputation. Nah. It couldn’t be.

Gibson’s lawyers say he was set up but there is a ton evidence to indicate the opposite.  Oksana’s teeth were knocked out, there is a bruise on their baby’s chin, allegedly from when Mel hit Oksana while she was holding the child. Oksana’s son is also reported to have witnessed the verbal abuse of his mother.

Next they will claim Gibson’s traffic stop and subsequent anti-semitic rant to a Malibu police officer was also a set up.

Poor Mel. The world is out to get him. Him and OJ Simpson. Both victims.

Please! Someone from Gibson’s camp get this abusive, angry old man some help before he hurts someone, or even worse, kills someone or maybe self destructs from the venom brewing inside him. Compared to him, Lindsay Lohan is Mother Terresa.

One thing for sure. We will be hearing a LOT more about Gibson in the coming months.