I bumped into General Wesley Clark at the Milken Institute here in Los Angeles recently -he has a book out.  I was not convinced it would make a gripping blockbuster movie so I passed on the movie rights.  Last year the general was at Burning Man… according to Harvard Law School professor, John Perry Barlow –according to a tweet the Dead Head poet tweet at the time. 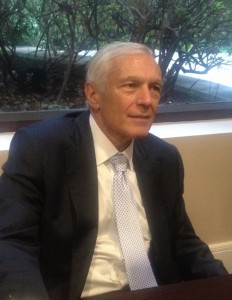 is Don’t Wait For the Next War –the working title for the movie script might be Who’s Waiting for War.  It’s his vision of a strategic alliance by policy maker and law makers that will wean the US off overseas dependency on fossil fuel and galvanize industry, bankers and workers just like the heady times of war… but without the war.  “The oil industry is the most powerful industry in the world!”  Clark explains.  “Imagine finding money in the ground,” he adds with a chuckle.

“I love this country”, Clark declared about ten time as he gave a review of his trajectory to three-starhood.  He went on to explain how this country lost its canine teeth since the end of the Cold War.  The point he’s making is that in times of crisis everyone pulls together and GET THINGS DONE.  Why then can’t both sides of the aisle establish relevant and desirable goals for this country and like any good command define a strategy to achieve those goals.  “Think strategically, you learn that in the army,” he barked.

In support of his confidence in America’s greatness he cited US achievements during World War I, “A ship was sunk and we were in the war,” he explained.  “The US took control of the industry, the press, the railroads, they mobilized ten million men, put them in uniform, sent two million to Europe, one million in battle, lost one hundred and fifty thousand… and all in eighteen months.” I was reminded of the Grand Old Duke of York… mind you he lost the battle at the foot of the hill and so the kingdom was lost to the Red Rose rabble.  Clark went on to explain that a further outcome of the Great War was, “The economy boomed, we had the gold –we banked the loans for the weapons overseas.   It seems he is shrewder than his slight frame suggests.

Enthusiastically and energetically the general advocated an all hands on deck (to use an Navy term) call to Americans to get this country back where it should be.  I wondered what he was smoking at Burning Man.

“World War II pulled us out of the doldrums,” he continued (also staying with the Navy references).  “The Cold War was an existential crisis so Ike brought the country together without going to war, a common enemy, peace was our objective.  Then in 1991 we lost our strategy… then in 2001 we came together, but without a real strategy, Obama came along and got us out of Iraq and Afghanistan…” he was on a roll, but where was he going with all this?

“We have five challenges,” he declared.  “Terrorism, Cyber attack, climate change, China and an unstable financial system.”  Ah!  He was arguing that these should be enough to unify the deckhands into a concerted, strategic protocol that will change the destiny of this country and the World.  :Keep the challenges on the board so we can keep our vision on the big picture.”

“When you’ve been in politics it’s like a forth dimension, you can smell it,” Clark revealed.  “Saudi Arabia recycles petrodollars into extreme fundamentalism… keep the money in the country not sending it overseas for oil –have the tools in place to come off carbon fuel.”

The General is a man of expansive vision and he is confident that seeing the woods is a key element in securing a brighter future.  “ISIS is crisis… it’s like we’re walking across a room looking through a straw at the carpet,” he mused.  “Provide for the governance of Syria… there’s more than one plan that will work, you just got to stick with the plan you select… get the right people in office.”  I guess a general, thinks like a general because he’s a general.   Regarding foreign policy Clark was clear about the need to hold unwaveringly to treaties, “You always defend your allies.  On that rock of obligation we have built our modern world.”

He went on to contrast the challenge we face today in dealing with ISIS with his challenge as commander of the NATO forces in stopping ethnic cleansing in Bosnia, “ISIS, there’s no single mind to change unlike Kosovo… we only had to get Milosevic to stop what he was doing.”  I was impressed with his clarity of though, his confidence and his energy.  But I wondered what sort of conversations he had had with the Dead Head poet at Burning Man.

The 2004 presidential campaign came up and Clark explained he learned a lot from that experience.  He mentioned his wife running out of patience with his humming and hawing about running.  She told him she was going out for a walk and wanted him to have decided by the time she got back.  So the general turned to the fifty-fifth Psalm, went through that… nothing… moved on to the fifty-sixth Psalm… and then the phone rang, and he was running.  He never made it to the White House, but he said he did learn valuable lessons as he tried to get to 20500 zip code.

“Define yourself, define you opponent, respond quickly,” he explained.  “It’s not about crushing your enemy, it’s about compromise.”

One problem Clark sees in politics today is polarization resulting from parties running on values.  He pointed out that pro lifers who believe life begins at conception verses those who believe life begins at birth can never reach an agreement by compromise.  “Values are not compromise-able,” he explained.  “They are not the bases for you running government, focus on the issues not the values.

Maybe the movie could work!  The new working title should be Burning Man.  It could be the story of a general who is surrounded by a sea of hazy minds; all committed to driving deep into a desert to commune with a fourth dimension and find the truth about man’s conflict with… with everything.  Sort of a twenty-four hour psychic crisis of confidence with the wars of the world flashing across the screen like angry flames, consuming, destroying and… and then, you have a phoenix rise up out of the embers, and the general is now a Marcus Aurelius of the twenty-first century.  I’d better get back to him about an option deal!