What if you’ve never been able to say the things you needed to say to someone you love.  Not till it’s too late.  And then you realize that you might even have to make the ultimate sacrifice for that person, but that act of selfless courage may or may not be enough to save their life. 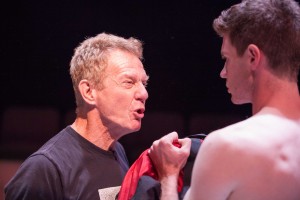 That is the basic premise of Daphne Malfitano’s new play, “Paternus,” making its world premier at the Rogue Machine Theatre in Los Angeles.

Darrel Larson as “Steve” and Timothy Walker as his son, “Stephen” portrays a father and son embarking on a four hour drive to visit family when they are blindsided by an intense snowstorm that that finds them trapped in their RV and potentially dooms them with little hope of survival.

The story launches with it’s climactic high point and gradually unfolds in a series of flashbacks, each character peeling back the layers of what we discover to be a strained relationship.  And yet there is love and caring on both sides.  Steve is a tough dad, a military man who has seen the brutality of war.  His son, Stephen a typical teenager who resents having to accompany his father on this unexpected journey.  Both men soon struggle to come to terms with the need to 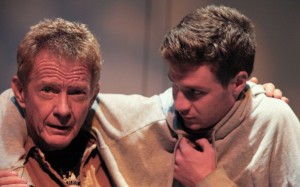 do whatever it takes to survive.  For the father it is a chance to vindicate his part in this unrealized relationship.

After giving away the ending in the first few moments, writer, Malfitano, takes us to somewhat familiar territory as the father and son recap their past differences.  How to make this compelling is the challenge that Malfitano faces.  Fortunately her talented cast rise to the occasion.  An empathetic Timothy Walker is excellent as a boy struggling with his brutal reality.  One senses his innocence, his desire to survive as we gradually discover his character’s inner voice.

Darrell Larson grounds the play with his strong performance.  His character makes a choice to open his heart, his love for his son no longer buried under the macho façade that has kept these two from any meaningful communication.

Ably directed by Mark St. Amant, the play has a cinematic feel, the production employing black & white film clips of the location in which the action takes place.  Produced on the set of another production that runs at the theater, the out of kilter set design, or lack of one, is not hard to get over.  Brendan Han’s original score and sound design most certainly compliments the piece.

Running at a brisk 45 minutes, “Paternus” is intense and thought provoking.  A well performed two hander that is certainly worth a look.