Young actor, MICHAEL GRANT  pulls his black Mini Cooper into a parking spot at the same time I am trying to find a place to park myself in a dark garage below a Beverly Hills cafe.

“Hey, Michael,” I call out, never having met the man in person, but having recently seen his acting chops in the fine, new, currently unreleased drama, “Fair Haven,” he looks much like he did in the movie.

We shake hands and head 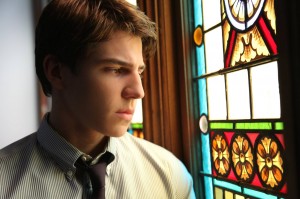 upstairs to order breakfast, finding ourselves relegated to an outside table where not even the hot, high octane coffee I am sipping keeps me warm on this unusually brisk morning in March.

My early rapport with Michael also seems just a little bit on the cool side.  He is soft spoken and seemingly introverted, but as we play the get to know you game his sweet side begins to seep through and it doesn’t take long to warm up to this kid.

His backstory is not all that unusual. The son of a doctor in Tennessee, he and his sister Stephanie, along with their mom, Anna, made the move to California five years ago, initially to launch Stephanie into the world of acting.  A classically trained pianist and lifelong musician, then 14-year-old Michael also decided that, since he was in Hollywood,  he too might give acting a try.  He soon landed an agent and his early auditions quickly gave him the confidence that he was looking for.

“It was when I came very close to landing a lead on a Disney show called, “Kickin’ It” that I 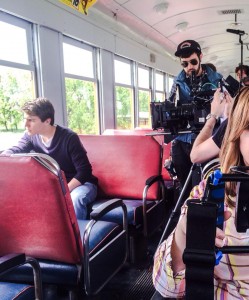 realized I can do this,” he explains.  Now, five years and many acting workshops later, Michael is on an upward trajectory with strong supporting roles in the features, “Where Hope Grows” in which he plays a cruel bully, and “Still Life,” an indie film dealing with high school kids figuring out their future.  “Where Hope Grows” recently premiered at the Dallas Film Festival and has since been picked up for theatrical distribution by Roadside Attractions.

Perhaps his most valuable credit to date has been as a series regular on seasons 4 and 5 of “The Secret Life of The American Teenager” a show that has not only given him some financial stability, but has also brought him some fans.  He has since guest starred on various other TV shows,  slowly building an impressive resume for a young actor who has only just turned 19.

But the purpose of our meeting today is to talk about “Fair Haven,” a film where Michael gets to do the heavy lifting.  He plays the role of “James,” a musically prodigy who has been sent by his father to ex-gay-conversion therapy where they try to scare the gay out of him and return him to his family full of Jesus.  Stopping in to see his father on his way to study at the prestigious music academy, Berklee, the character discovers that his old man has spent his college fund, virtually trapping the boy in the narrow-minded confines of his small town.  James goes to work for his dad on the farm and begins the charade of dating girls.  Along the way he runs into his best friend and one time boyfriend, “Charlie,” well portrayed 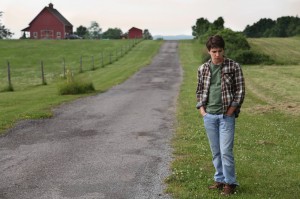 So what was it about this project that appealed to him, I ask?

“The story by the film’s director Kerstin Karlhuber and the script by Jack Bryant was so well written that it immediately spoke to me.  After reading it I put myself on tape. I read some scenes and played the piano and sent it off to the casting director.  As luck would have it I landed the role and soon found myself in the town of Victor, New York making this movie.

And how was the shoot?  “Short and fast paced.  I was in most of the scenes.  I had very little down time and when I did I kept mostly to myself.  This was my first lead and I knew the responsibility I was a carrying but truthfully, by the end of the film I was emotionally drained.  I remember calling my sister from my hotel room and telling her I don’t know if I can muster the energy for my remaining scenes, I was that exhausted, but somehow I did and we got it done.”

Having seen a rough cut of this film, I can say that Michael’s portrayal 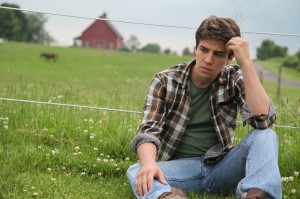 of “James” is poignant and vulnerable, a trait that he was now allowing me a glimpse of as our outdoor breakfast chat continued.

We switch gears to talk about his life in L.A.  How does he spend his time?

“I study.  Watch a lot of classic movies.  My parents recently gave me a boxed set of films from the 50s and 60s.  I loved them, especially enjoy foreign films.  Truffaut, Godard, Andrei Tarkovski.  Brilliant directors.”  What about hobbies or pastimes?  “Basketball.  I’m a big NBA fan.”

So what is it about acting that made him put his classical music training on the backburner for now?  “Acting is a craft of the heart,” he tells me.  “It’s my chance for real artistic expression.   Although the television work I’ve done is important, I hope to be able to continue my current momentum as an actor in indie films.  I think features give me a chance to be a part of perhaps more meaningful stories. I’ve definitely grown as a person doing these last three films.  On “Still Life” in particular I made some amazing friends.  People I hope to know for a long time to come.” 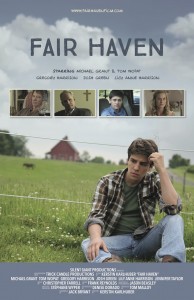 to emulate?  Which directors would he love to work with?  “Terrence Malick for sure.  I loved “The Tree of Life.”  Wish I could have been in that one.   Chris Nolan, David Fincher, those are probably some other favorites that come to mind.  As far as actors, I really admire Ryan Gosling’s work and the way he has managed his career.  Andrew Garfield is another actor I admire and reaching back a few years, Timothy Hutton who was so brilliant as a high school kid in Robert Redford’s “Ordinary People.”

With the temperature dropping we pay our bill and stand in the parking lot to warm up in the sunshine as we say our goodbyes.  I’ve enjoyed this interview.  Michael’s turned out to be a cool guy who is setting the foundations for a long lasting acting and music career.

I climb in my car and follow him out of the garage.  He zips away in his little Mini Cooper, perhaps to continue chasing the dream.

From where I’m sitting I’m willing to bet he finds it.