An Interview with Ella Turenne about her new show LOVE, LOCS, and LIBERATION in Atwater Village Theatre complex

Image is everything in Hollywood. Especially for young women, trying to break into the business, it is essential to present a strong persona, one that will enhance your level of talent and credits. Seasoned celebrities are constantly working on creating and maintaining their image, but how often is it authentic? 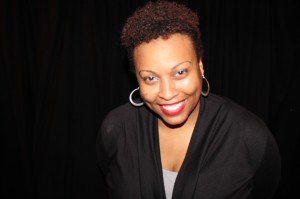 Ella Turenne is a writer, performer, activist, and educator. She doesn’t think that we see enough of people’s true identity, and she has set out to encourage people to find and present their authentic image.” She tells us that “being a champion for freedom, justice, and expression, has helped me come to understand how important it is to find your own authenticity. It’s a struggle that everybody has, particularly young black women, usually around beauty and identity.” She has written, and is performing in, a show that faces these image challenges head on.

Ella’s journey was triggered by her own experiences while growing up in the United States, struggling to balance this current culture with her family’s traditions from her Haitian culture. As an adolescent, it seemed imperative to keep up with trends but after numerous attempts to do so she discovered that finding her own distinct and authentic identity brought the most success in her life. This is a lesson she hopes to impart on a whole new generation, especially young black women who feel they must live up to a specific image that is presented in social or traditional media, or by Hollywood’s TV and film industry. She 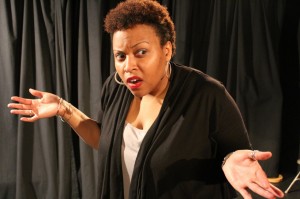 has created a show that tells the story of her own journey, what it took to find her own authentic image, and she tells it through the voices of twenty-one different characters. Ella’s story is centered on beauty and image, defined through her hair styles along the decades. She connects the history of “locs” to politics, identity and culture, illustrating why hair is an intimate and essential part of Black life. Whatever the concern about fitting in, Ella champions the idea of expressing your authentic self. Something Hollywood could take a lesson from.

Hollywood Revealed: When did you first feel compelled to write this show?

Ella: There was a documentary on HBO, years ago, called “The Black List.” Black celebrities were asked to tell their stories. Later, when they requested submission, I sent a story about my hair. It was one of the five pieces that they selected. So, when I got to tell my story in the documentary, it crystalized my thoughts about self-image and it encouraged me to write more stories.

Additionally, I remember seeing Chris Rock’s documentary “Good Hair,” which made a big impression. But, I thought it was still telling the story from a man’s perspective and also it was feeding into the Hollywood image of what Black women “should be.” Black women are complex and I wanted to show that. Somebody else is always telling our story it seems, in Hollywood, not us. I felt 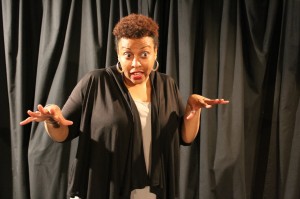 this was my chance to provide, not just one image but, the complexity of images we as women hold.

Hollywood Revealed: Celebrities construct their images in a way that will help “sell them” in the business. You’re a strong advocate for finding your “authentic self,” but do you believe that by doing so it will always serve one for the best?

Ella: I do – and I know this because I struggled with it as an actress when I was thinking about getting dreadlocks. I was concerned if I did, I wouldn’t be able to work as an actress. And after going back and forth for a couple of years my best friend said, “either do it or stop talking about it!” Tough love. I did and found that I was not less of an actress because of it. People want to see compelling people on the stage and on the screen. Looks are a part of it, but it should not limit you. Look at actresses like Lupita Nyong’o and Viola Davis who’ve proven you can be your authentic self and still play a variety of characters. And by the way…being your authentic self doesn’t mean you can’t decide to change your look! It’s our prerogative to do that.

Hollywood Revealed: Do you think it is more difficult for minority women to find their authentic selves? Why?

Ella: I think women of color have examples all around them of what authenticity is. They see it in their neighborhoods, families, in history. And they also create it for themselves. That’s not the difficult part. The difficult part is that those identities are not celebrated enough. And the irony of that is, many people want to copy the authenticity of women of color while at the same time dismissing it. That sends very confusing messages.

Hollywood Revealed: Your show, about self-image, focuses on your own story through your hair, and talks about the history that many black women have in relation their own hair and beauty issues. Why is it an important story to tell?

Ella: This story is about hair…but it is also about the struggles we all face, particularly as women. And these struggles sometimes manifest themselves in our hairstyles. I wanted to explore that – the pain AND the joy. I want to reveal our complexity and also get us talking about how we feel about these issues. It’s an important story to tell because affirming our experiences, our history, and our beauty is always necessary in a world that tries to tell it for us.