LOS ANGELES – July 13, 2012 – The winners of the 2012 Downtown Film Festival Los Angeles were announced earlier this evening in an awards presentation at The Hayworth Theater in Los Angeles.
Taking top honors were “Betty I Am” and We Are Legion” for Best Picture feature narrative and feature documentary, respectively. “Betty I Am” by director Jose Renteria Jr.is a stylish black-and-white film shot on 16 mm that follows the story of 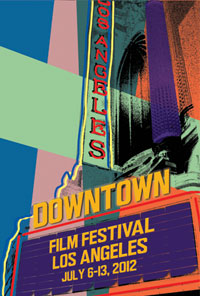 two siblings brought together by the untimely death of their father. “We Are Legion,” directed by Brian Knappenberger, is an in-depth, behind-the-scenes look at the secret hacktivist movement Anonymous.

Best Director honors went to Anthony Meindl for his narrative feature “Birds Of A Feather”and to Caskey Ebeling for her documentary feature “Getting Up: The Tempt One Story.” Meindl’s film is a new twist on the time-honored comedic movie genre where the action revolves around the mounting of a musical play. Ebeling’s film is a poignant account of the comeback of well-known graffiti artist Tempt One who became ill with ALS, the debilitating neurological affliction also known as Lou Gehrig’s Disease.

All four films – “Betty I Am,” “We Are Legion,” “Birds Of A Feather” and “Getting Up” made their Los Angeles premieres during the festival.

“These independently produced feature films reflect the extraordinary quality and diversity of content in today’s independent cinema. We’re very proud to have played a role in providing a showcase for them in the Film Capital of the World,” said Greg Ptacek, Festival Co-Director.
Sharing the Best Picture Short Film award were “Been Good To Know Yuh” by director Corey Brandenstein, an imaginative depiction of a chapter in the life of poet-songwriter and folk singer Woody Guthrie, and “This Is A Story About Ted and Alice” by director Teressa Tunney, a battle of the opposite sexes with a decidedly different ending.

The Audience Favorite award was captured by “Heathens and Thieves,” a genre-bending action thriller with a film noir plotline of intrigue and betrayal but set in the Old West.

Oscar winner Melissa Leo took the Best Actress award for her dark comic role as a woman on the dating circuit in “This Is A Story About Ted And Alice.” Joey Capone was named “Best Actor” for his role in “Carlos Spills The Beans,” playing a character who inherits the family restaurant with disastrously funny consequences.

A complete list of the film awards, as they were presented at tonight’s Closing Night ceremony, follows. Downtown Film Festoval L.A. is a nonprofit organization dedicated to spotlighting emerging film talent in the culturally diverse and historic downtown district of Los Angeles.

18. Best Director – Feature Documentary
Caskey Ebeling – GETTING UP: THE TEMPT ONE STORY

20. Best Picture – Documentary
WE ARE LEGION
Produced and Directed by Brian Knappenberger