The Skylight Theatre Company first heard Nathan Alan Davis’ play, DONTRELL, WHO KISSED THE SEA read last season and set out to launch it in Los Angeles during the celebration of Black History Month.

Last year, The National New Play Network, an alliance of non-profit theaters that champions the development and continued life of new plays, announced that Davis’ play had been chosen to receive their support for a 2015 rolling world premiere. 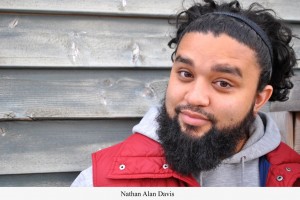 It premieres at the Skylight Theatre in Los Angeles on February 20th before moving to the Phoenix Theatre in Indianapolis, IN; Theater Alliance in Washington, DC; the Cleveland Public Theatre; and finally the Oregon Contemporary Theatre.

“Dontrell, Who Kissed the Sea” is being co-produced by Lower Depth Theatre Ensemble, whose founders were equally stunned by the beauty of the language and the importance of the play’s theme…yearning for lost knowledge of ancestral truths.

The story concerns eighteen-year old Dontrell whose dreams have never been more fantastic or more harrowing. Nightly, he sees a captive African—the spitting image of his own father—thrown overboard during the Middle Passage. As visions of this man’s last fateful hours continue, 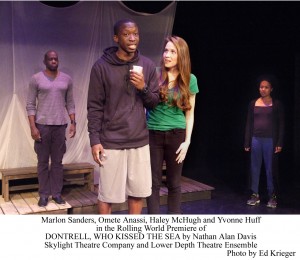 Dontrell makes a decision: He will dive into the ocean and retrieve the drowned captive from the deep.

Like all great explorers, whether of land, sea, or the human heart, Dontrell’s journey has the makings of a classic adventure. It’s a tale that resonates for our time.

Playwright Nathan Alan Davis says he is “compelled by transcendence. By our ability to reframe, re-imagine and re-define the world as we move through it.” Indeed a refreshing new young perspective in Hollywood…and beyond. Influenced by Hip-Hop and the spirit that animates it, Davis is a writer of mixed race.  The African Diaspora and the Western tradition are both essential parts of his identity. He works for “an ever advancing, united world civilization.”

We had a chance to discuss his work recently:

Hollywood Revealed: Was “Dontrell, Who Kissed the Sea” inspired by your personal journey of self-discovery and ancestral history?

Nathan Alan Davis: Yes and no. In many ways it was inspired by what I do not know about my ancestral history. The play is a dream, a fantasy, a hope, a prayer. It is a fable that I believe the world needs.

HR: What was your mindset when you began work on this play, and did you start with an outline or was it more of a streaming of consciousness?

NAD: I started working on it in the spring of 2012. The idea snuck up on me and the story formed kind of gradually. I don’t have a clear recollection of a single moment that sparked it. My mindset was: this play is going to be produced (at Indiana University, as part of my MFA program) and I need to tell a good and entertaining story that comes from the heart.  Ken Weitzman was heading up the program at the time and he established a wonderful system: MFA students in their 2nd and 3rd years get full productions of their brand new plays as part of the department’s main stage season. You learn about your play (and the playwriting craft) by bringing it through the production process. That really made all the difference in the world.  Knowing that the play was going to be staged the following spring added a natural sense of urgency, excitement and danger to the writing process.

HR: In the Skylight Theatre production, the play is infused with drumming, dance, and poetry. Is that unique to this performance, or a style experienced in all the incarnations of the play?

NAD: The poetry is all from the script. Dance is mentioned in the script as well, though of course I did not write choreography. Rhythm and percussion is also present in the script and I think the drumming in this production is a natural outgrowth of that. I’m sure each incarnation of the play will be somewhat unique, but movement and rhythm are key elements in this piece.

HR: What are your greatest influences in life, and how have they informed your work as a writer?

NAD:  I am a Baha’i and have been all of my life. The Baha’i teachings are by far my greatest influence and it’s impossible to quantify how they have informed my work. One thing I can say related to this play is that Dontrell sees his quest as his “contribution to civilization.” I would like to see my life and my writing that way: as an important contribution to a story much greater than myself and more wonderful than I can imagine.

HR: Why do you think this play is important for people to see, and what do you hope that they will come away with after attending?

NAD: I hope they come away wanting to come back again. That may sound glib, but it’s very sincere. Plays are so ephemeral. I hope this one is so compelling and funny and truthful and entertaining that you want to spend more time with it. That you drag your friends and loved ones out to see it before it disappears. I really think I have to let the audience’s experience of the play speak for itself when it comes to things like lessons and takeaways.

HR: How did this happen to come to Los Angeles during the celebration of Black History Month?

NAD: It came to Los Angeles because Skylight Theatre Company and Lower Depth Theatre Ensemble were both excited about the script and wanted to produce the play–so they came together and made it happen. Gary Grossman (Producing Artistic Director of STC) engineered the timing by carving out a spot in his season so it would launch during the February BHM celebration. This is the first of five productions of Dontrell around the county this year. The others will be in April, May and June.

HR: Do you have a vision for this story to become a film?

NAD:  I think the story could make an excellent film. If that opportunity presents itself, I’d certainly be open to adapting it. For now I’m focused on making the play as strong as it can be.