The Director’s Guild have announced their choices for outstanding achievement in film for 2008.

David Fincher for The Curious Case Of Benjamin Button

Christopher Nolan for The Dark Knight

The Directors Guild Of America award for feature film is traditionally the most accurate barometer of who will win the best director Oscar and only six times since the awards began in 1948 has the winner not gone on to claim the Academy Award.

This is the first Directors Guild Of America feature nomination for Boyle and Fincher, the second for Nolan after Memento in 2001, the second for Van Sant after Good Will Hunting in 1997, and the fourth for Howard after Coccoon in 1985, Apollo 13 in 1995 and A Beautiful Mind in 2001, which earned Howard the award and the Oscar.

“A film is a collaboration, but it is the director’s energy and vision that brings the elements of script, performance and production into a satisfying totality,” Directors Guild Of America vice president Taylor Hackford (pictured below) 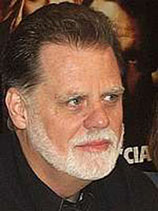 “Today’s nominees demonstrate how vision, combined with skill and talent, creates magic on the screen. What makes this award truly meaningful to directors is the knowledge that only this award is decided solely by their peers – the men and women who live the passion, sweat and fear that goes into creating feature films.”

The awards will take place in Los Angles on January 31.