The play, “Hellman v McCarthy” at Theatre 40 in Beverly Hills tells the story of two old battle axes who also happen to be literary lionesses, as they battle it out in the court of public opinion, dragging the legendary talk show host, Dick Cavett and the PBS television network into the fight.

Mr. Cavett portrays a younger incarnation of himself in this fine production directed by Howard Storm and written 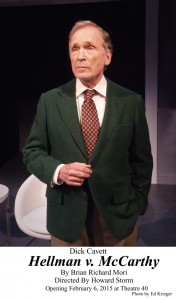 The circumstances leading up to this senior citizen cat fight are based on real facts.  In 1979, celebrated writer, Mary McCarthy (“Memories of a Catholic Girlhood,” “The Group”) was a guest on the “The Dick Cavett Show.”  During the interview the outspoken Ms. McCarthy slammed writers, John Steinbeck and Peal Buck before moving on the a more hated literary competitor, Lillian Hellman, author of the hit Broadway plays “The Little Foxes” and “The Children’s Hour” as well as the memoir “Pentimento: A Book of Portraits.”  Ms. McCarthy told Mr. Cavett that Hellman was an overrated as well as a dishonest writer, continuing to say that “every word she writes is a lie,

Hellman and her male nurse happened to catch the broadcast and aghast, Ms. Hellman filed a libel suit the next day, not only against Ms. McCarthy but also against Dick Cavett and PBS.

It is a fact that Hellman was criticized for inaccuracies in a particular chapter of her book, “Pentimento,” a story that was ultimately turned into the Academy Award winning film, “Julia” starring Jane Fonda and Vanessa Redgrave.

in the 1930s when Hellman became a communist sympathizer and McCarthy followed a more liberal path.  Professional jealousy and even a tryst with each other’s gentlemen friends didn’t help matters any.

After a  watching each participant give depositions and vent to their respective attorneys as well as directly to Mr. Cavett himself, the audience finally gets to witness the much awaited face to face confrontation between Hellman and McCarthy.

The playwright does a great job of showing us just how it might have gone down, because this event never happened and, as Mr. Cavett explains, might only be imagined.  And imagined it is.  Full of slurs, innuendo and bawdy language, the clash is vericious.  For the audience it’s fun being a fly on the wall.

In real life the conflict between Hellman and McCarthy was never resolved, the lawsuit was never settled because Ms. Hellman passed away.  One can almost be certain that had she not died, it almost certainly would hav

e gone to the courts.  Neither Hellman nor McCarthy were willing to concede an inch.  The case was finally dismissed in 1984 and this battle of the wills makes for wonderful drama that has been well brought to life by Mr. Mori.

Cavett playing Cavett is s great piece of casting.  He is charming and relaxed as himself, opening the show as he would on television with a playful monologue.   He introduces  his TV guest, McCarthy and recreates a portion of their interview, setting the nasty wheels in motion.

Marcia Rodd, recreates the role of Mary McCarthy, having originated the role off-Broadway in 2014 in a production that also starred Mr. Cavett.  Ms. Rodd is superbly dry and feisty as Mary McCarthy and ably delivers the writer’s point of view.

Flora Plumb is most compelling as the foul

mouthed, Lillian Hellman.  She delivers a balanced portrait and she makes the audience both hate and feel empathy for her .  Hellman refuses to back down, not only from the pending lawsuit but also from the mean spirited cranky old woman she has grown into.

M. Rowan Meyer is strong and believable “Ryan,” Hellman’s nurse, a fan boy who puts up with the Hellman’s meanness long after many would have walked away.  In a powerful emotional encounter with Hellman his character turns confrontational when finally pushed too far.  It is a touching moment from Mr. Meyer who also originated this role off-Broadway.

Martin Thompson and John Combs are a fine addition to this cast, but it is Dick Cavett who helps balance the story, moving us between actual facts and a dash of fiction, in a sense breaking the fourth wall by his very presence in this compelling play that should not be missed.

Hellman v. McCarthy
Theatre 40 in the Reuben Cordova Theatre
241 S. Moreno Drive in Beverly Hills
on the campus of Beverly Hills High School
For tickets, call (310) 364-3606 or visit www.theatre40.org
Ends on Feb 28, 2015
Tickets for one subsequent performance at The Saban Theatre on March 1, 2015 available at Ticketmaster –