F this and F that. F you. I will kick your F-ing ass are just some of the niceties that Christian Bale hurled at cinematographer  Shane Hurlbut last year during production of Terminator:Salvation. The mad rant was captured on tape and can be heard all over the web.

To listen, check out TMZ’s site till we can download it for you here.

“No, don’t just be sorry! Think for one f–king second! What the f–k are you doing? Are you professional or not?” 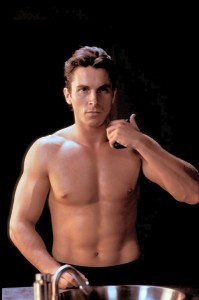 The rant continued in that vein for several minutes, with the F-word taking center stage.

Would this kind of behavior be tolerated in any other business? I don’t think so.

I am sure Bale was putting out emotion in what we are told was an intense scene, but he is a professional actor, and has been for many years. Surely he knows that on a set of over fifty people, sometimes shit happens. People have to move for some reason. Bale could simple have yelled cut and asked to go again. He certainly didn’t have to humiliate the DP in such a demeaning and insulting manner.

Bale was charged with assaulting his mother and sister last year in London. Although those charges were dropped, the actor obviously has major anger management issues.