As the fight for human rights marches on, it’s usually minorities that carry the burden of educating the majority. Regardless of where the disparity occurs, it takes a constant effort and spotlight aimed at what needs to be changed.

In Hollywood, artists continue to shoulder a good portion of this burden by creating works, taking on roles that portray characters that have been marginalized, and producing stories that are able to penetrate the hearts and minds of those with traditional or old-fashioned attitudes. Theatre artists are particularly adept at creating these stories. 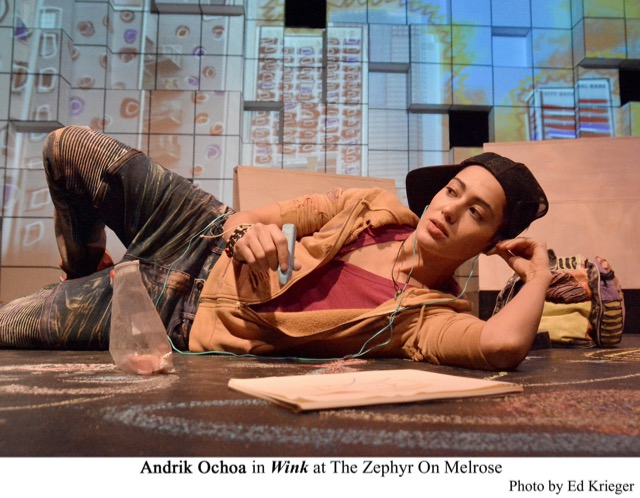 Writer Neil Koenigsberg took up the challenge of creating a play that looks at discrimination against sexual orientation, and gender questioning individuals. “Volunteering at a New York LGBTQ center for homeless youth was a transformative experience for me,” says Neil Koenigsberg. “It became the inspiration for WINK. I wanted to tell a story about a non-binary kid, about the unexpected connections that happen in life and how it can forever inspire and change us.”

Taking place in Hollywood, the title role in “Wink” is played by non-binary actor Andrik Ochoa. The journey to finding their own identity has been a long and challenging one for Andrik, but well worth the work. Finding the perfect role in WINK feels synchronistic, not unlike the meeting of the two lead characters in Koenigsberg’s play. 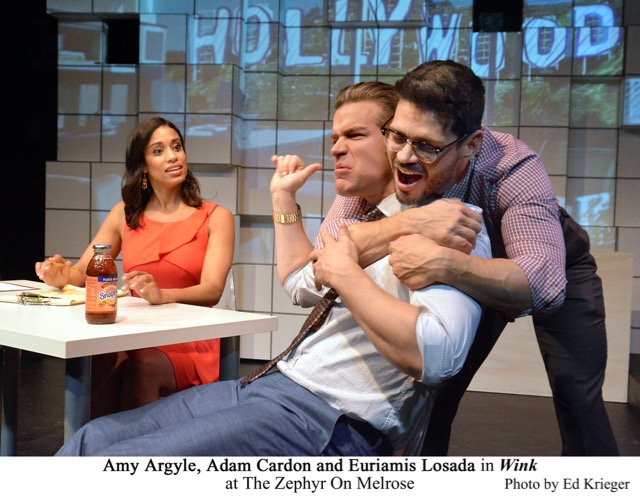 HR: What drew you to this story and inspired you to audition for the role of “Wink?”

Andrik: At first, I was just curious about the audition and excited about getting back to acting after taking a break. As soon as I read this phrase in the play, “Nowadays youth describe their sexuality by not describing it,” I fell in love. I haven’t been able to find better words to describe my own life. Neil Koenigsberg’s play was a sign, “like poetry,” it became something very personal.

HR: Why do you think that it’s important this play is being done in Los Angeles now?

Andrik: Gender Identity censorship can be a horrifying prison. It is not easy to understand unless you’re going through (that hell). It takes emotional intelligence and sensitivity, and even then sometimes that magical connection of understanding someone else’s life can only be done through stories like “Wink.” Theatre, movies, and TV reach out and change the world, hearts and minds, faster than any political agenda or law. That’s why I think it’s a crucial time for this play to be done in Los Angeles. The conversation is topical and well integrated in a broadening consciousness for parity. I think we need that right now I believe if we all get to be our true selves we’ll be so content there will be no room for hate, frustration or anger.

HR: Would you share some of your personal journey that relates to similar experiences?

Andrik: Truth is I’m a “Wink.” I came here the first time as an exchange student. I met the first girl who ever treated me like a guy and I fell in love like an idiot, it helped me realize who I was. She was the first one I came out to. Once I put enough courage together I returned to LA to think things through next to her, away from my family. I started transitioning with the support of the LGBT center. Over the holidays was the first time that I saw my family in 3 years. Now my mom calls me “Mijito,” my (little) son.

HR: What pronouns do you prefer?

Andrik: I’m ok with any, even though he/his is my favorite. It is who I always dreamed of being and my social statement. They/them is not easy for everyone but I appreciate when people use it. I don’t mind and I even like being called She sometimes because, even while being a man I realized I was faking and trapped as much as I was when I was a woman. I understood that a huge part of who I truly am is actually feminine. So at some point I just said f*#! it, enough about having to explain myself, I’m going to be true to my heart every moment and stop worrying about boxes. 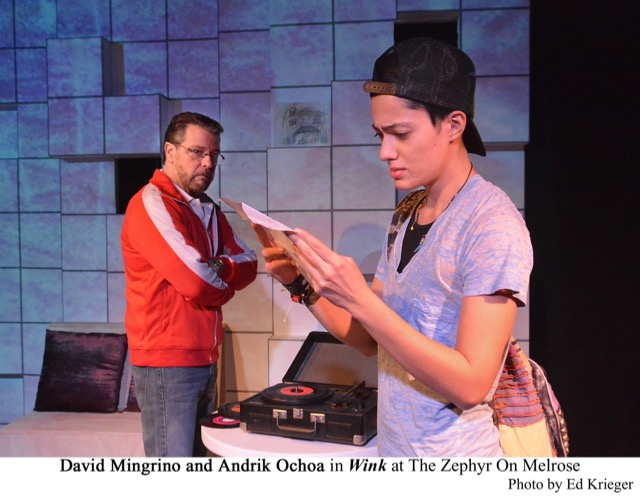 HR: Building a career in Hollywood is not easy. What have been the biggest challenges for you so far?

Andrik: Being who I am has been a double bladed sword. As an outsider, an immigrant and a gender rebel, of course is been harder to find a place in this industry.

But, at the same time, once you find that place it becomes yours, and it will take you far because it’s honest. If I weren’t who I am and hadn’t gone through the struggle that I faced, I would have nothing to say. Finding who I am was the biggest change! Before that, all my emotions were like far behind a wall. It made acting so much easier. I can’t believe how much that has changed. It’s like magic.

Reservation and information at www.Plays411.com/Wink and 323-960-1055. Wheelchair access and ample street parking.