One of the most successful female songwriter’s of all time, Carol King, has written dozens of memorable pop hits, a number of them becoming classics that still pack a punch in the new millennium. 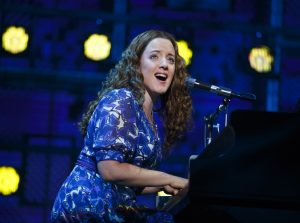 exploration of the music star’s life told through some of her best loved material. The show is a feel good flashback to King’s early years to observe the songwriter’s rise to greatness. It is an inspiring story about talent, determination and a picture perfect love that ultimately turns sour.

A vibrant ABBY MUELLER portrays Carol King. With a powerful singing voice and impressive piano skills, Miss Mueller, (whose sister originated the role on Broadway), is both likeable and relatable.

As the play unfolds, King meets the handsome Gerry Goffin (LIAM TOBIN) while at Queens College in New York. Having already sold one song to music publisher, Don Kirshner, (CURT BOURIL) she is in need of a good lyricist. Goffin is a playwright who dabbles in lyrics. Before long the young couple are not only writing partners but also the parents of a baby girl. Carol is only 17 at the time. Regardless, they marry 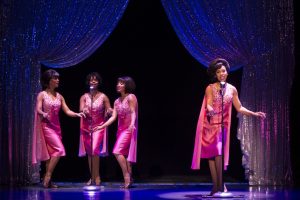 and after what seems like a relatively short struggle, break through with “Will You Still Love Me Tomorrow,” a song that becomes the first number 1 on Billboard’s Hot 100 by a black female singing group, The Shirelles.

Goffin and King give up their day jobs and go on to pen a string of other classic hit songs such as “Chains” (covered by the Beatles), “The Loco-Motion,” recorded by their babysitter, Little Eva, “Take Good Care of My Baby” for Bobby Vee, “Up on the Roof” for the Drifters, “I’m into Something Good” for Herman’s Hermits, “One Fine Day” for The Chiffons, “Pleasant Valley Sunday” for the Monkees and “(You Make Me Feel Like) A Natural Woman” for Aretha Franklin. Songs that sound as vibrant today as they did in the early 60s.

With a book by DOUG McGRATH, “Beautiful” shows us a time when talent prevailed, and when an opportunity presented itself, as it did for Goffin and King, careers 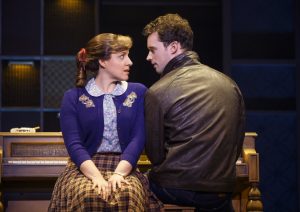 were made and sustained. The production has a warm and fuzzy vibe, much like watching a Turner Classic on a rainy Sunday afternoon. It’s the perfect musical with a parade of pop hits that not only make you smile, but may also put a tear in your eye. Music is emotion and there is a considerable amount of that here. That said, “Beautiful” doesn’t let you dwell on as as it. There is too much fun to be had.

Balancing Goffin and King’s journey is that of songwriting competitors, and King’s best friends, Cynthia Weil and her writing partner, Barry Mann. This young musical duo were no slouches either. They went on to write songs such as the classic, “On Broadway” and “You’ve Lost That Loving Feeling” for the Righteous Brothers, tunes we get to hear performed in this production. 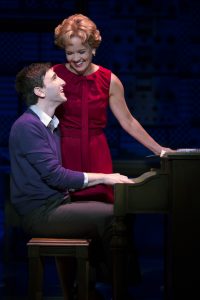 GULSVIG  portrays Weil with BEN FANKHAUSER as Barry Mann. They are both highly talented performers who deserve a share of the credit for “Beautiful’s” charm. Fankhauser in particular is a standout. He almost steals the show with his dry sense of humor, impressive singing voice and powerful stage presence.

LIAM TOBIN is a strong presence as the womanizing Gerry Goffin and SUZANNE GRODNER as King’s meddling mother brings some additional humor.

There are also some other great performances by the talented ensemble cast. Particularly impressive on Friday night was JOHN MICHAEL DIAS as Neil Sedaka who later returns in various incarnations, almost stopping the show with his turn as one half of the Righteous brothers on “You’ve Lost That Loving Feeling.”

Director, MARC BRUNI keeps the play moving at a clip. There is hardly a dull moment. This show fires on all 8 cylinders during its 2:45 running time. 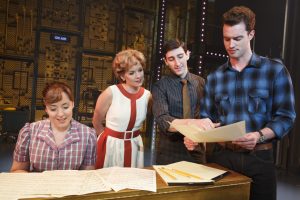 well as some slick costume changes between numbers.

After her breakup with Goffin, a liberated Carol King went on to an illustrious solo career, writing  other soulful hits such as “You’ve Got a Friend” and the play’s title song, “Beautiful.” Her 1971 solo album, “Tapestry” held the No.1 spot for 15 consecutive weeks, remaining on the charts for nearly six years. It has sold well over 25 million copies worldwide and won four Grammy Awards including Album of the Year.

Hers is a story worth telling, and definitely worth experiencing in what is a crowd pleasing, toe-tapping lavish jukebox musical.