The AFM, which boasts it’s ability to connects an audience of determined buyers, sellers and  producers opened on Wednesday having sold out all exhibition spaces at the Loews Santa Monica Hotel and the Le Merigot Beach Hotel next door.  This year a total of 409 production and distribution companies from 36 countries are exhibiting their product at more 900 screenings of 526 films in 35 different languages.  Many are world premiers with major stars such as Christopher Walken, William H. Macy and Ray Liotta. Other films are ultra low budget horror offerings with no-name actors.

The vibe on opening day at the Loews Wednesday seemed somewhat somber. 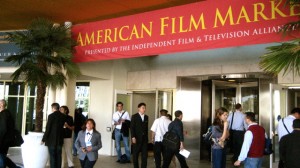 The upheaval in movie financing has cast a pall at the AFM. The Global credit crunch has hit the independent film makers especially hard. Unlike the studios, many of them do not have easy access to capital, and instead must piece together funding to make one film at a time. Not only is getting a film made more difficult, selling it is even harder. Buyers have less spending power and yet looking for product with bigger star names in order to feel secure. It’s a chicken and the egg situation. Less money to make films, but bigger names needed to sell them.

Industry insiders predict that a lot of smaller production and independent sales companies are going to be hit very badly.

Even before the credit crisis, the independent film business was suffering. Paramount Pictures this year folded its specialty film label, Paramount Vantage, into the studio. That followed a move by Warner Bros. to close its specialty arm, Warner Independent Pictures, as well as Picturehouse.

Money from private equity firms and hedge funds has also grown scarce at the same time that several banks have cooled on lending to Hollywood.

Still the parties at the AFM, though noticeably fewer this year, continue.  Filmmakers have eternal hope.

The AFM runs through November 12th.