Kim Poirier is a Canadian actress who was last seen in the TV Land sitcom, “The Exes” and is currently doing the festival circuit with her new feature film, “Awaken.”  She is also involved with hosting duties on the website Pop Galaxy.  We caught up with the busy Miss Poirier to chat about the myriads of projects she has going on.

Kim Poirier: Pop Galaxy (www.popgalaxy.com ) is an interactive destination site that specializes in the entertainment industry.  We have everything from film and television news, on set reporting for films we are producing in-house, interviews, coverage on events, updates on new emerging technology, new comics, 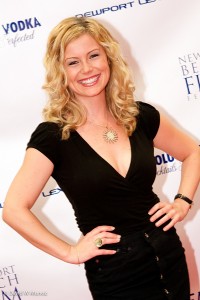 ebooks, video games, and we are also going to be hosting original content that we will shooting with the Studio W production team.

HR: How did you get involved?

KP: Studio W and Moving Pictures Media Group (the production company I have been working with) have a strategic partnership wherein they specialize in e-commerce and digital distribution through the various ancillary markets and the companies they own (Wowio – ebooks, and The Duck – ecomics), and we are the film production side of the operation.  I realized that Pop Galaxy didn’t have a host for all their content so I pitched the idea of being the face/liaison of sorts for all matters Studio W and MPMG.  I would connect the dots and present the material through Pop Galaxy.

HR: What kind of response has the site had?

KP: We are currently building the foundation for the site and integrating all the elements.  So far, it’s been a great tool and has had positive feedback all around.  We are working towards making it fan driven and it’s proving to be a viable asset for all companies involved.  We are currently teaming up with other various partners.  I’ll keep you posted on that!

HR: Where are you from originally?

KP: I was born in Quebec (Canada), and then moved to Toronto when I was 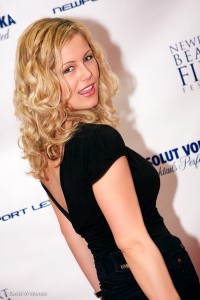 two years old, then lived in Vancouver for about a year and a half, and now I’ve been in Los Angeles for almost three years now.

HR: How did you get started in the entertainment world?
My mother got me into commercials and modeling when I was a little kid.  I did 30 commercials growing up and tons of catalogue work.  My mom was even in a movie when she was 9 months pregnant with me.  So you can say I started early.

HR: What was your first strong role?

KP: That’s a strong tie between the feature film “Decoys” and my series regular role on “Paradise Falls”.  “Paradise Fall” was my first big role other then actor roles (under 5 lines) and we shot for 6 months.  We were shooting 10-15 pages a day so education wise, it was the best training I could have ever gotten with the hands-on experience.  I learned so much during that time.  It really shaped me.  But then with “Decoys”, it was my first lead in a feature so there was this level of responsibility that I felt that was different then being in an ensemble cast (there was still a responsibility in PF just in a different way – I wasn’t carrying the show).  We were shooting out of town for two months and I just jumped into it full fledged.  There was a real synergy between my leading man, Elias Toufexis, the 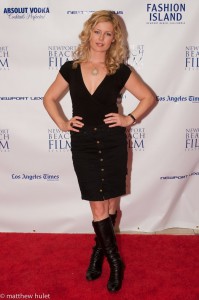 director, Matt Hastings and myself.  There were some “magic” moments so to speak during that time.  It was also a huge discovery for me as an artist as to the range and depth I didn’t know existed within.

HR: Tell us about the other two films you have in the can?

KP: Just this past week, “Awaken”, premiered at the Newport Beach Film Festival.

HR: What’s the film about?

KP: It’s a fantasy romance wherein a man is deeply struck by a first encounter with this woman he meets in a coffee shop only to be tragically hit by a car moments after.  When he goes to bed that night, he has a vivid dream about her and continues to have this ongoing relationship through his dreams–all the while, she is in a coma and they are having this love affair through a different realm.  Another film I’m working on, it’s not quite in the can, but it’s a fully packaged and developed project and we are getting ready to start shooting it shortly

HR: What’s that one called?

KP: “Mad Mex.”  It’s a mockumentary in the vain of Christopher Guest’s work (A Mighty Windy, Best In Show, This Is Spinal Tap) about a famous movie star/Mexican wrestler/rap star who obliviously walks into success after success (meanwhile possessing no real talent) and at the height of his career, mysteriously disappears.  It’s sort of a satirical view on perceptions, and a play on the old tale of “The Emperor’s Clothes”.  The script is very much highbrow humor and has you experiencing ‘light bulb moments’ after the read.

HR: How did you make the transition to producing and why?

KP: I was cast in a film that was set to shoot at a specific date and they kept pushing it later and later.  I then discovered it was because they were short 2.5 million.  I was so passionate about this film, that I took the initiative the find the money.  It was like opening up a can of worms!  I started networking, meeting other creative types, various investors–a whole new world opened up to me, and life just started to fall into place in a synchronistic manner.  I had a short film I worked on back in 2006 that was at the Cannes Film Festival and I started working with their production team. That was my first taste.  Since I’ve been in Los Angeles, I’ve saddled up the Moving Pictures Media Group team ( www.movingpicturesmediagroup.com ) and haven’t looked back. I’m very fortunate to be surrounded by so many industry veterans and professionals

HR: What was the first thing you did when you arrived in Los Angeles?

KP: I went to a Tiger City concert that night! I’m a huge fan of the band so it was a real treat.

HR: What advice do you have for other Canadians looking to make the move down here?

KP: Network network network!  I would suggest having your agent/manager from Canada to set up some meetings with managers in Los Angeles and then take a trip out to meet them.  Get a sense of the city and where you might want to move. Get lawyer-ed up (if you can afford it and work appropriate) and start the process of filing for an O-1 Visa.  Once you find a good match with a manger out here, they can start submitting you and help you find an agent if need be.  Having a good team representing you is very important.  They especially need to know what the “sale” is – they need to know how to market you and how to submit you for the right roles.  Another big portion of it is confidence.  When you feel good in your skin, you will resonate that and start attracting opportunities.  It’s also a BIG city so it may take a while to get going (this is where your confidence will come in handy).  Once you are here, get out there and be seen.  Take meetings, go to events, meet new people, connect with other Canadians out here, share stories from the trenches, and keep at it!  Training is also essential; you want to ensure you are consistently in a state of preparedness cause you never know when opportunities will knock.

KP: On a Saturday, sleeping in and going for a run with my boyfriend and the dog at Runyon Canyon, making brunch, going out and seeing a movie, getting some dinner and just chillaxing.  On Sunday, doing some early morning yoga, meeting a friend for lunch and going for a walk, catch up with all my Canadian friends via phone, and then reading a book. Sometimes Sundays can be filled with errands though…who am I kidding!

HR: Thanks for talking with us.