You don’t have to be a fan of the 1988 action film Die Hard starring Bruce Willis to enjoy Theatre Unleashed’s current stage production making it’s West Coast premier, A VERY DIE HARD CHRISTMAS by Josh Carson. Many have proclaimed Die Hard to be a Christmas film and if you agree and happened to love the original Die Hard as much as I did, then you are guaranteed to laugh your ass off during 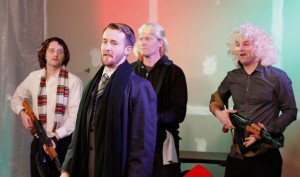 this good-natured spoof complete with songs, puppets, automatic weapons and bloodshed. This production is a raucous, raunchy, rambunctious salute to the original movie, as well as virtually every other Christmas film ever made.

Incase you’ve forgotten, the story concerns John McClane, an off-duty cop home to see his young daughter for the holidays who reluctantly finds himself having to hide in an L.A. highrise after a team of German terrorists seize the building and take hostages that include McClane’s ex wife. Alone, tired and pissed off, McClane fights hard to save the day, ultimately covered in blood, his bare feet cut by shards of glass. But save the day he does, his battle cry “Yippee Ki-Yay, Motherfuckers” to be uttered again in the subsequent, and less that spectacular sequels that followed.

Feeling much like a Second City improv, A Very Die Hard Christmas doesn’t shy away from racy language, sexual innuendo, and definitely not a shortage of blood. The body count is high here. 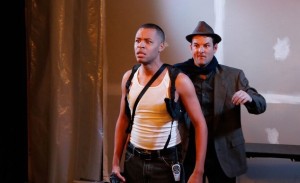 musical comedy but it all seems to work thanks in part to Josh Carson’s clever script, Gregory Crafts direction as well as a highly talented cast that include a committed Wade Wilson as “John McClane” who faces off against David Foy Bauer’s nasty villain, “Hans Gruber.”

Other “bad guys” include, Sean Fitzgerald as “Schnell,”  Adam Meredith as “Douche” and Bradley Upton as “Karl,” the three bumbling terrorists who don’t seem to know the meaning of schnell.

Rest of the cast include Liesl Jackson as John’s estranged wife and Margaret Glaccum as “Ginny.” Additional terrorists are brought to life by sock puppets, with a fun cameo opportunity for an audience member each night as building owner,  “Mr. Takagi.”

Since it’s a Christmas musical, the show is filled with holiday favorites including “All I Want For Christmas Is You,” “The Chipmunk Song (Christmas Don’t Be Late)” and “You Make It Feel Like Christmas.” The cast warble their way through these and other tunes and while most of these performers are non singers, it’s the energy and the intention that pays off and makes the musical component fun and 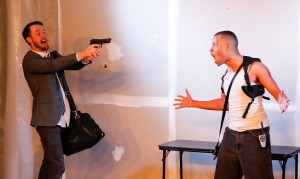 Cast standouts include David Foy Bauer who rises above the clutter with a solid performance. He is one actor that can sing as made clear in the parody duet, “Buddy, You’ll Die Outside.” Foy Bauer is both funny and menacing in his role.

Also hilarious is Adam Meredith as “Argyle,” McClane driver whose comic timing and delivery had the audience howling. Margaret Glaccum shines as the pregnant “Ginny,” her expressive face worthy of a role in TV sitcom.

As the story unfolds in an unfinished office building, Tamazine Fritz’s set design is nothing more than dry-wall. Not impressive but it works and made stronger by Gregory Craft’s lighting design. Ann Hurd is credited as Scenic Painter.

Aaron Lyon’s sound design and Mark Bell’s special effects deserve kudos for the multiple gunshots and a half-dozen or so karaoke tracks. Brandie June’s costumes recreate the movie’s original wardrobe styles as well as the era.

Though clocking in at a slightly long 2 hours, including a 10 minute intermission, A Very Die Hard Christmas is an impressive parody and a welcome addition to the growing list of Christmas musicals.  Lets all say, Yippee Ki-Yay.

TICKET PRICES: General Admission: $20
*PWYW if you donate $5 at the box office for Camp Del Corazon

MORE INFORMATION:
For further information, please call: (818) 849-4039
Or check out their website www.theatreunleashed.org