Homelessness is a situation that devastates lives. Most of us avoid thinking about it. We look away as we pass the ever growing army of homeless souls the now seem to have become a permenant fixture in Los Angeles. We avoid eye contact, even as we make a small contribution. A new play at the Hudson Theatre directed by Jay O. Sanders confronts the issue head on and, at least for an hour, it makes the problem hard to ignore.

The Bench, a Homeless Love Story is set in the urban decay of a crumbling city during the start of the AIDS crisis. Mined from true stories of people in the New York neighborhood where he once lived, writer/activist Robert Galinsky presents a sobering look at life on the streets. Looking very much like a member of the homeless army himself, Galinsky’s one man play grabs you by the heart as it tries to open your mind. He introduces us to five homeless characters, four men and a woman, whose lives have become forever entwined. Each has a different story arc. Yes, some are self destructive, but many are victims of unforeseen circumstance. One thing is certain. They were all once somebody’s child. With brutal honesty and gentle humor, Galinsky acts out their various narratives, and as he shares their perspective, it becomes frighteningly obvious that some people are just one mistake, one life crisis away from joining this exploding population.

As you leave the theater you might find yourself filled with more compassion. But are you?

On opening night, a homeless man wondered into the after-party held in the Hudson Cafe next door. The man started yelling and making a scene, and as he did, most, if not all of the audience members froze. Tried to look away. I couldn’t help notice the irony. Was the lesson of “The Bench” already forgotten? Is ten minutes all it takes? This is exactly what Galinsky is trying to impress upon us and for that alone, The Bench, a Homeless Love Story should be seen. 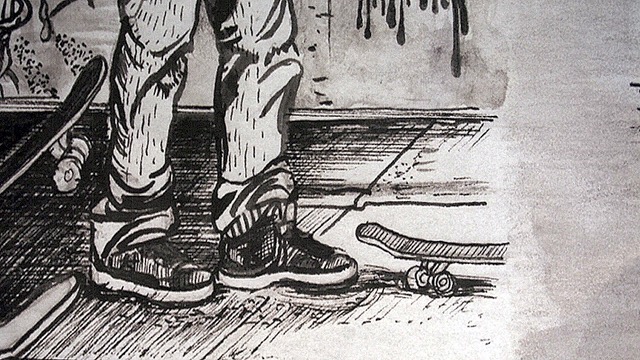 Arthur has had solo exhibitions at RARE gallery in NY and at the University of Massachusetts Boston, with numerous group shows in other major cities.

The Bench runs at 8pm Thursdays and Fridays through November 9, 2018.