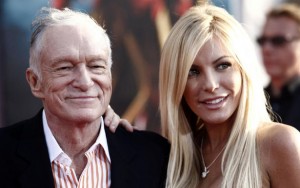 early Sunday Hefner said that he’d given a ring to girlfriend and Playmate Crystal Harris, adding that she burst into tears upon receiving it.

To clear up confusion over whether the ring was simply a Christmas gift, Hefner later tweeted: “Yes, the ring I gave Crystal is an engagement ring. I didn’t mean to make a mystery out of it. A very merry Christmas to all.”

This would be the third marriage for the 84-year-old, star of E! reality series “The Girls Next Door,” which chronicles Hefner’s life at the Playboy Mansion.

Harris is 23, according to her online biography by E!