Hollywood has just hosted the 4th Annual 3D Summit. The three-day event clustered techno-gurus, mega-producers, global game-developers and hardware manufactures into the prestigious Hollywood and Highland Center, all dedicated to reassuring their eco-system fellows that 3D is here to stay. 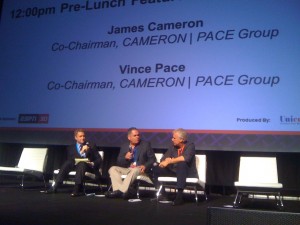 benefits of seeing a movie, a show or a game in 3D? Will the audience pay a premium for the experience? Is there good 3D and bad 3D? James Cameron is clear on answer to these questions, and he tells the attendees that 3D adds in a meaningful way to the craft of storytelling in the visual medium. Cameron, like Bob Dowling, the conference Chairperson, acknowledges that 3D is going through technical growing pains, and he proclaims, like other insiders, that the economics of the whole thing are much more favorable than HD was at a comparable stage in its emergence as new technology.

There was a consensus of opinion that the general audience is not yet sold on the 3D experience and the weak performance of 3D over recent months is the result of several factors. Once these qualifiers are adequately addressed, the Masters of the New Dimension believe, the Hundred Monkey phenomenon will quickly flip the audience/viewer/gamer into a 21st Century poly-dimensionalist.

A big factor holding back the inclusion of the 3D experience in homes is the absence of autosteroscopic monitors –that means you’ve still got to find those pesky glasses down the back of the sofa if you’re going to watch ESPN’s Monday Night Football in 3D. And if Big Sis has nabbed the last pair before you got to the den then you are out of luck and back in the bedroom watching the 2D version on you’re old HD flat screen! The glasses are a major complication, “We’re five year away from true autosteroscopic home monitors,” declares Tim Alessi, Director of New Product Development at LG Electronics, as he demonstrates LG’s newest line-up of 3D monitors. LG’s just-to-market units can be enjoyed with the less expensive “Passive” glasses. “We give the buyer four pairs with the purchase of each set,” he explains. But he still wanting us to put on “Blinkers”! Even James Cameron did not seem to be sufficiently in touch with the world of “real families” to register that all the multi-millions of dollars spent on making his movies can be reduced to little better than a VHS experience by a simple pizza! Sticky finger are prone to smear even the most “active” glasses!

Cameron is aiming at the silver screen as the best place to see his new 3D version of Titanic. A 3D conversion that he acknowledges is not going to be the splendid experience it would have been if he had shot the original in 3D, but he’s confident he can get it to ninety-plus percent. Content is in short supply, yet for the theater goewers there is another problem that ripples back to the filmmakers and producers. “We need more 3D screens.” Cameron explains that the limited number of screens means that a film plays for a week or so before it is bumped for the next 3D film. More screens will result in more people getting a chance to experience the 3D marvel as movies will play longer at the theater.

The number of movies shot in 2D and converted to 3D is another factor that both hurts and helps the 3D evolution. Conversion is a subjective process; it requires selecting a depth map from images that has no depth data recorded. If it is skillfully done with the director involved it stands the chance of getting close to what might have been achieved if the project was shot in 3D, but it can also be “cheesy” and painful on the eyeball. On the upside it does provide more of the much-needed 3D content that justifies the purchase of home 3D monitors.

Cameron and his partner Vince Pace are keen to guide and nudge the viewer into the world of 3D by striving to ensure that the viewing-experience is beyond that of HD-2D. “We support the crafting of good film by providing the right tools,” Pace explains. His Cameron / Pace Group is establishing an industry standard, the CPG Certified stamp, that will be attached to projects that meet their high standards, a sort of “DOLBY” of depth! Cameron is not egotistical about his high standards, “We’re competing against ourselves,” he confesses. “We’re like back-yard drag-races who work on their own engines.” Cameron Pace do not sell their rigs and other technologies to film makers, they only lease them. This ensures that the filmmaker has the up-to-the-minute upgrades available to them even as they are in production or post.

Low luminosity was raised as a concern by a number of the panels, “Good lighting leads to a halo effect on the entire movie,” proclaims Michael Lewis of RealD. And it appears after much discussion that it is not difficult to resolve this issue. Running the current projectors better will help, and upgrading to units that can handle the light requirement is only a matter of spending money… by the theater owners, that is. “We spend multi-millions making the movie the way we want it to be seen and then we give it to a guy who gets fifteen bucks an hour to run it!” laments Cameron.

Another projector tweak that will add to the splendor of the 3D experience is upping the frame rate from the standard 24 per minute to 48 or even 60 per minute. “Our current projectors can handle that rate and our digital cameras can shoot at this rate,” explains Cameron. The result is smoothing out the strobe effect caused by the lower frame rate, an effect that is more apparent when the image is in 3D.

Might all these refinements lead to an experience that is too real? “Filmmakers are artists,” Cameron reminds his listeners. “Don’t worry if we make it too real, we can deal with it. It’s your choice, you can add grain, or scratches if you want.”

In the gaming world 3D is a dynamic advance in gaming experience according to Shane Satterfield, “…3D adds a huge difference to the gamer.” Satterfield is one of the game-makers who has seen improvement in the gamer’s skill level when playing in 3D. And in gaming, as Simon Benson observed, glasses are no problem, “In games you are engaged, you can even expand the function to audio or whatever.”

ESPN, the self-professed sports-centric 3D network, declares that just about any sport is stunning in 3D. Their recent coverage of the Masters Tournament and its great audience response is proof enough.

The collective opinion of the panelists and attendees is that 3D is a 21st Century necessity. And with TEVO you’ve almost got the 4th dimension!